So, while looking for something else, I found this article, Mysterious Detour While Driving? This is the phenomenon, frequently observed while driving in rural America, where the road comes to a T or makes a pair of 90-degree turns for no apparent reason. I learned that some of those curves are due to the fact that the Earth is round.

When the American and Canadian plains were laid out, the goal was to survey them into equal squares of land while running the north-south boundary lines parallel to the lines of longitude. Unfortunately, these lines of longitude get closer together the closer to the pole, which in North America means going north. In order to make the squares of land equal, every so often the surveyors had to shift the squares.

This may be an explanation for something I've experienced for years. Sometimes when driving to or from the Home Soil in Central Illinois, I take a state highway, Illinois 49. There are several big paired 90-degree curves in the road, only one of which has any apparent reason for existing.

You learn something every day.

This entry was originally posted at https://chris-gerrib.dreamwidth.org/733470.html. Please comment there using OpenID.

I'm writing a historical fiction novel set in 1986. I had reason to wonder in the course of the novel how significant a lump sum of $50,000 would be to a college freshman. I found a web page which listed how much a US Navy officer would get paid in 1986 - the first full year of my active duty career.

I discovered that I would have made around $20,000 gross in 1986. Now I was far from rich, but I was quite comfortable as a new college graduate with than income level.

My Twitter feed, ironically, also blew up with links to this site - menus (with prices!) by year.

This entry was originally posted at https://chris-gerrib.dreamwidth.org/729856.html. Please comment there using OpenID.

I've fallen off the wagon of daily posts here. This week the main reason was my getting sick on Wednesday, which put the whole week in a tailspin. In any event, I shall try to do better.

Since they've accumulated, have some links:

1) My radio interview is up for a re-run. Visit The Author's Show.

2) An interesting two-part history of one of the most popular cartridges in history, the .38 special. Part 1 and Part 2.

This entry was originally posted at http://chris-gerrib.dreamwidth.org/670419.html. Please comment there using OpenID.

I've been busy, so have some links:

1) I'm still giving away free e-copies of my book The Night Watch.

2) You can read an interview of me.

3) An interesting article: Why Nothing Works Anymore. Best opening line: "“No… it’s a magic potty,” my daughter used to lament, age 3 or so, before refusing to use a public restroom stall with an automatic-flush toilet."

4) VOICE
America’s military doesn’t need more money — what it needs is an engaged public to demand a genuine strategy.

5) Among other things: Mars Needs Lawyers.


1) A very stunning image of Daphnis, a tiny moon in Saturn's rings.

2) A very interesting article about why England left the European Union. From the article: " it doesn’t want to be just another member of a team."

3) Don't get you hopes up about this very pretty drawing of a flying car.

I hang out a lot with other writers, and in that company the fact that I've written a few books is not particularly noteworthy. But this past week, two "regular people" (a co-worker and my personal trainer's wife) both became aware of my writing habit. They both then expressed surprise, thought it was a big deal, and in one case promised to Buy My Books. (Thanks!)

In order to ease into the new year, herewith are a few links of interest:

2) This article based on a book argues that blacks became concentrated in urban areas due to white action in the form of "sundown towns." (Blacks passing through had to be out by sundown.) Although this obviously happened, I also suspect there was a lot of assimilation. There are many Americans who claim "Indian" blood, but that was really "black" blood.

3) Max Gladstone liked Rogue One, but thought it could be better.

4) This Giant Furry Dog Playing With A Kid Will Make Your Day.

Have a couple of links:

1) My book The Mars Run is getting some press.

2) An evacuated island - The story of St. Kildas

3) The minimum wage is not just for kids: 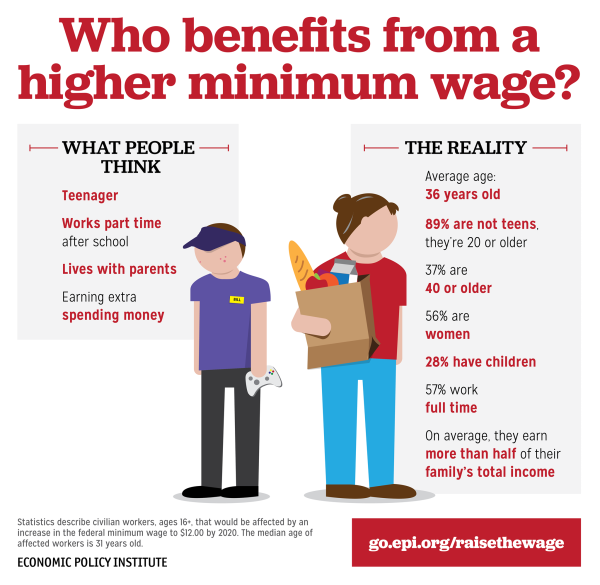 I apologize for the radio silence. Wednesday and Thursday I was taking a cybersecurity course, and had no time to blog. Today I had to get caught up a bit. Over the past weekend, I was at Windycon, where I was on a panel entitled "Where Did English Get That Word."

As is typical with panels, we digressed a bit and got on other languages, namely Spanish. If you've been to Spain, you'll note that people in the interior of the country seem to speak with a lisp. I told the audience the story I'd heard, namely that this was because a king of Spain had developed a lisp and his people imitated them. (It actually tied into English, as we were discussing how words associated with the common people developed negative connotations while words associated with nobility got positive connotations.)

Well, somebody in the audience jumped up and said "that story about the lisp is wrong!" She had lived for 18 years in Madrid and said that the cause of the "lisp" was just an artifact of language. I thanked her for her correction. When I got home, I did some googling and found out that she was right and I was wrong.

You learn something every day.

In order not to be "all Trump, all the time" herewith are three links of interest.

A) Via the fascinating show Air Disasters I got the full story on Helios Airways Flight 522. This is the flight where, due to a cabin pressurization failure, all passengers and crew were killed. Of especial note is that one of the flight attendants attempted to save the plane but waited an extremely long amount of time before doing so.

B) Actor Mike Rowe, who's made a name for himself as the star of TV's Dirty Jobs reality show, has interesting thoughts on who should or should not vote.

C) I have to admit a personal preference for revolvers. Having said that, I found this article recommending that the USAF use revolvers as their service pistol interesting.

It's Tuesday, so have some links:

A) My book The Mars Run is featured on eBookSoda. Please share the love.

B) In regards to Black Lives Matter, a great video: Tolerance is for cowards.

C) Point Roberts, USA - An American city stranded at the tip of a Canadian peninsula.

D) Barack Obama on 5 days that shaped his Presidency.
Collapse